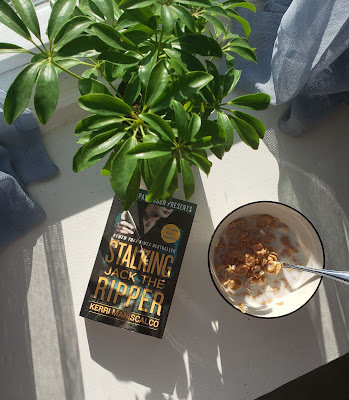 You might have seen this book around, or you've seen the other books in the series, so this probably isn't a new-to-anyone-book. I arrived late to this particular party and I am regretting it!

When I first heard about this book, it was 100% due to bookstagram. People were posting about it, photographing it, showing it off. It was a thing. Like I usually do with books I see on bookstagram (especially with YA books that are hugely hyped up) I go to my local bookstore to find the book and check it out myself in person.

For whatever reason, the first time I picked up this book.... I wasn't interested.

Honestly, I was surprised at myself. I love murder mysteries, particularly historical ones so the whole history of Jack The Ripper and all the books/folklore/stories written about it have always captured my attention. This one though? I didn't think this was the book for me.

Right off the bat, the back cover alludes to the main character loving Jack The Ripper. Maybe I was afraid this book was going to go down some seriously unforgivable path of adoration and encouragement of a murderer. I don't know what I was thinking, but I didn't think I should read this book.

I caved and grabbed up one of the mass market paperbacks. Guess what? I liked it. A lot. I'm going to read more of the series. It's on my TBR. Especially the next one.

This book was quite different than a lot of the other books I've read surrounding Jack The Ripper. The story about people around the case was different enough and new to me that I found it to be quite interesting. Not often do you see a story from the point of view of a young woman who is studying forensic medicine in that time period.

This book does tell you who (in this fictional literary universe) Jack The Ripper is, which was a surprising but interesting take on it.

If this book is something you've stayed away from, for whatever reason, I urge you to pick it up and read a couple of pages. It's not what I expected but in such a different and good way, that I think you'll find yourself regretting not having read it sooner like I did!

Recommendations: If you are intrigued by the mysteries surrounding Jack The Ripper and love reading anything and everything, fiction or not, about him and the case, then you'll most likely enjoy this one. Also if you have a love for tough female heroines who stand up for themselves and for women in general, you'll like this book!

Posted by Pamela Burke at 6:16 PM No comments: