A Study in Charlotte by Brittany Cavallaro 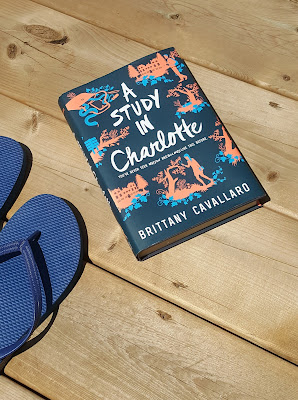 This is the first book in a relatively new YA trilogy that has to do with Sherlock and Watson. In this series, Sherlock and Watson were real people who've gone on to have families, and their descendants are still alive and well out there in the world carrying on the names.

This Holmes descendant is a girl named Charlotte. She's got the smarts, the habits, the behaviours, and the drama the surrounds the quintessential Holmes. The Watson descendant is a boy named Jaime. He's still trying to figure out where he fits in the big bad world, and comes into himself once he meets his Holmes.

They find themselves at the same boarding school in the states by some weird coincidence and they quickly make enemies of the same guy at school. It's all well and good until that guy winds up dead and the two main suspects are Holmes and Watson.

Honestly, I didn't know what to expect. I love Sherlock and Watson. Iterations of their greatness are always thrilling and this book did not disappoint. I loved it! A female Sherlock is something my heart has been missing for years. She comes complete with flaws and all, just like he did. I loved it.

The second book was recently released and I am super excited because, of course, I've already got it on my shelf. This is shaping up to be one great series and I am super happy that I found them.

There's just something so refreshing about series related to those characters being done with younger people, and a girl to boot. I was more than happy to go with the flow and just enjoy myself with this book.

Recommendation: If you've ever enjoyed a Sherlock Holmes story, movie, book, whatever before, than I think you'll enjoy this book. Totally for the fans who are open to a new twist.