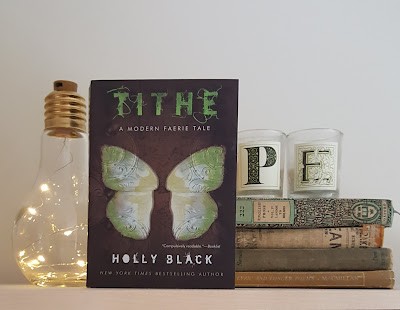 I did a little research and realized she had written a couple of books in this Modern Faerie Tales series  and my bookstore had them!

This is the first one as of publication order and its about a girl named Kaye who ends up going back to her childhood home and reconnecting with her past and those she knew back then. She finds herself in between a war between two faerie kingdoms and could lose her life.

I didn't do the plot justice, but alas, I don't want to give things away. It's a little book, not super hard to read, but totally gripping nonetheless.

What I love about Holly Black's work is that she not only takes you out of your life as it is now and brings you into an urban fantasy story about faeries, but even the real world parts of her her characters lives are so different from my own that it's like I'm transported out of my world twice.

She takes you and shows you the gritty, seedy world out there and then throws in faeries for good measure and you're swept away along for the ride. It's really quite awesome.

I am a big fan of hers and I think I will always be a big fan of hers. I just really love her writing style and faeries were always a huge thing for me growing up and I still love them now.

Recommendation: For the fans of Holly Black, for the lovers of faeries. For the urban fantasy YA lovers. I think this might just be the book for you.