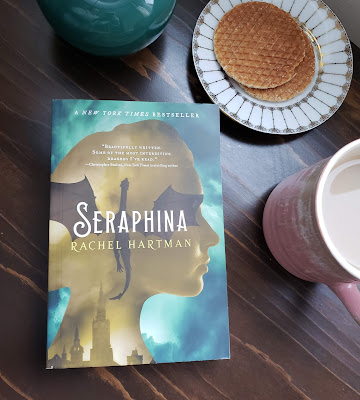 This was a bit of a cover buy, but that the same time, it was more because of another book by the same author called Tess of the Road. That was the book that kept drawing my attention over and over again at the bookstore, but when I did a little research, I learned that Tess of the Road had to do with the world created in another series, with Seraphina as the first book.

This is a young adult fantasy book. I read this one pretty quickly, all in one sitting. It dragged me in and kept me reading, although I ended up with some mixed feelings at the end.

This book is about a girl who lives in a world with dragons who just so happen to be able to take on a human like form. There has been a treaty for 40 years, and right when she beings to work for royalty with her music, there is a murder and she gets drawn into the investigation.

The dragons in this book are pretty interesting. I really liked them. The idea they are a mathematically, thoughtful species was really cool. I loved them and the dynamic in this book.

It's very medieval fantasy, and it's pretty good. I liked so much about it, but there's another part to the story that I was very interested in, but I'm not sure how it stuck in the story. I think I do need to read the next one in the series because I'd like to know more, and see if those parts reoccur.

The only thing was, I was left feeling a little bit like something was missing. I'm not sure what, exactly, but the detailing and the world building was so interesting that perhaps it was over too soon. I've taken quite a while to write this review because I wanted to think about the book some more. So much about it was great. Truly. There was just something that didn't feel complete, or like I didn't get what I was looking for out of the story.

Honestly, though, I enjoyed this and I think if you like YA Fantasy, you'll like it too!

Recommendation: For the lovers of fantasy, dragons, YA reads, interesting stories, then this is a book for you.
Posted by Pamela Burke at 12:01 PM