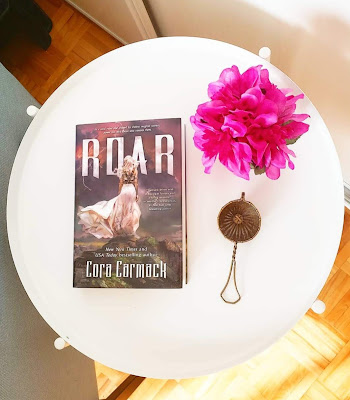 I loved this book!

If you're not familiar with this book, it's a young adult fantasy featuring a princess who's kingdom is in trouble, storm magic, princes, hunters, and a quest to save the world.

The writing in this book was lovely. I thoroughly enjoyed every second of this story.

We meet a princess by the name of Aurora who's about to marry a prince she's never met so she can hide the fact that she doesn't possess the storm magic that her family was born with. Her kingdom would suffer from the ravages of storms because she would be powerless to help, and she would be in major trouble if anyone found out. Marrying a prince who does have storm magic would cover it all up and both she and her kingdom would be safe.

She's almost fully resigned to her fate when she finds out that there are regular people in the world who weren't born with storm magic either, but now have it. There's another way to get storm magic and perhaps she can too, and won't have to marry that prince, or fall into ruin if she's found out.

I won't go into any more details because I don't want to spoil the story, but the rest of the book is her chasing that possibility.

I did think, going into this, that it might be like a lot of other books of this type (which I totally love) but it was more than that. It had a lot of the same bits and pieces from other YA fantasy featuring princesses and magic, but it was put together in a new way. This book was really refreshing that way.

There's romance, there's character growth, there's sub plots, and side stories. There's a lot of meat in this book, and I am digging it!!

There will be a second book very soon that follows this one and I CANNOT WAIT! I need to know what happens!!