The Lost Apothecary by Sarah Penner 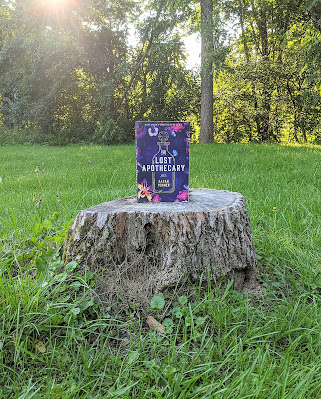 This book was a pick for the book club that I help coordinate at work. It was chosen by one of our members and I was looking forward to reading it because it sounds exactly like my kind of book!

The story is about a female apothecary named Nella from 1790's London who dispenses poisons to women to use on the men in their lives that have hurt them. The apothecary only helps women to hurt men, and she keeps a register that she records the names of the women and their victims, along with what she gave them to do the job.

We go along with Nella when she meets a 12 year old girl who's been sent on an errand to retrieve one of the remedies. The two form a friendship of sorts, but sets of a series of events that threatens the shop, and everyone who's listed in the register.

The story also follows present day Caroline as she spends her tenth wedding anniversary alone in London. She comes across an old apothecary bottle on her trip and goes down the rabbit hole researching the shop and the "apothecary murders".

I liked the premise of the story, of course. After all, I greatly enjoy murder mysteries and everything to do with them. I also enjoyed both of the timelines. I think they meshed well together and it was interesting to see the similarities between women in the 1790's and women today. Many of the same problems still exist, especially when it comes to men!

This book was shorter than I expected and I finished it all in one sitting. I read it so quickly because I wanted more from this story. I was so drawn in by the premise and the idea of a murderous apothecary that I was expecting a much more nuanced and deep book.

Caroline was not my favourite character by far. She's in London alone on her 10th wedding anniversary because her husband cheated. The author did a good job of creating the husband as someone we all want to hate, but didn't do enough to give us a wife we could really sympathize with. Many of the reasons Caroline's marriage came to this was down to her choices.

I also felt while Caroline was researching the apothecary that in order to keep the story going, the author just made it super easy for her to complete her research. The additional characters the author threw in that help Caroline along, didn't feel like anything other than plot devices. They felt unreal. If you are going to write me a story that can happen today with actual people, then include things that could really happen.

I am hesitant to go into any more details on the story because I don't want to spoil anything for anyone. I will say, there was a moment where I got really angry at the book but my anger was short lived in that instance, for which I am grateful.

Had this book not beed a pick for my work's book club, I may have skimmed it instead of reading it fully because while I enjoyed parts, there were parts I could have done without.

Recommendations: This isn't a wow book. It's okay. If you wanted to read this, please do. It's not one I would condemn into the depths of book jail but it's not one deserving of high praise either in my opinion.