The Silkworm by Robert Galbraith 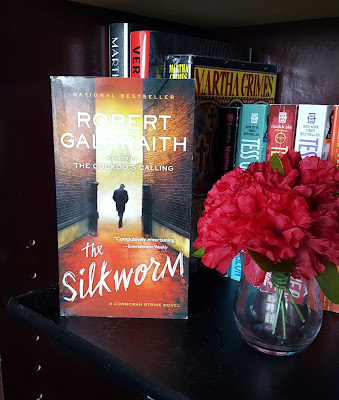 This is the second book in the Cormoran Strike series by J. K. Rowling aka Robert Galbraith.

These novels are the perfect mix of utter messed up bit and touching bits that balance everything out. Her writing is perfect (as always) and The Silkworm was very hard to put down. I spend the better part of a day lounging around my house finishing the book.

This book is about private detective Cormoran Strike who is investigating a missing person case only to have it turn into murder. I found the mystery to be hard, as in I couldn't figure it out at all before the end. I did find a few red herrings that succeeded in throwing me off though, which I love. I love to be always guessing. I loved the character development of Robin Ellacott and Cormoran Strike. I find them totally easy to relate to and I am very excited to read what happens next.

I will say that I kind of enjoyed this mystery better than the first one, but her writing style is just so awesome that I find myself drawn in no matter what the story is about. I think these books to deserve all the praise they get.

Recommendation: For fans of J.K. Rowling's writing and for all mystery lovers out there, this one is for you.
Posted by Pamela Burke at 10:00 AM No comments: 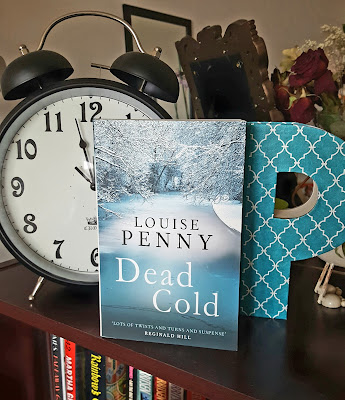 I cannot stop talking about these books. Fair warning: I'm going to write about each and every one in this series. Sorry, but I can't help it. They are just so darn good! And Canadian!

Louise Penny's characters draw you in, and it doesn't matter if they are good people or bad. She shows the flaws in everyone that really goes deep into human nature. You really can't help but identify and feel for her characters.

This book also involves the town of Three Pines. I was pleasantly surprised to learn that she wrote more than one book about the town and their super interesting cast of characters. Nothing feels stale or over done about these books either. Its a new murder and a new mystery each time.

In this book, a very disliked socialite is murdered and there seems to be a lot of unanswered questions in her past. I had no idea how it was going to turn out and I was quite surprised. As well, there is a lot of backstory in this one about Inspector Gamache and what has happened in his career that keeps coming back to haunt him.

I loved every page of this one. Louise Penny opens doors within the reader and its more than just reading a book, it's an all around experience.

Recommendation: If you enjoy mysteries and great writing, this is definitely the book for you!
Posted by Pamela Burke at 11:00 AM No comments:

Kilmeny of the Orchard by L. M. Montgomery 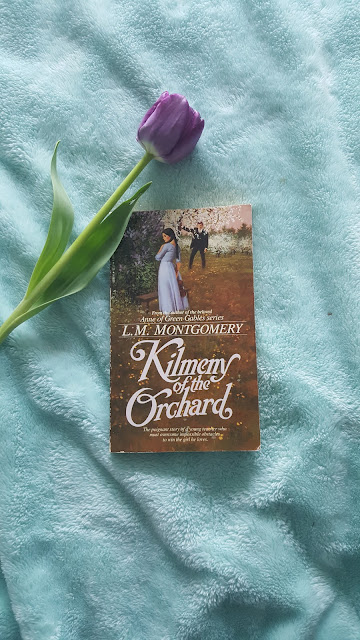 One of my absolute favorite authors is Lucy Maud Montgomery, and has been since I was a little girl. Her writing is just amazing and special. You may know of her as the author of Anne of Green Gables or Emily of New Moon.

I picked this one up used (as her lesser known books are harder to snap up) and was super happy to add it to my collection. This book is a love story. It's a sweet old time courting story that is so different from the love stories of today. It's about a guy who falls in love with a girl who is mute. He must work hard to win her heart.

As always the writing was descriptive and detailed but in such a way it's like each sentence is a gem on its own. It's beautiful and lovely, and totally great. It was simple and the ending worked out exactly how I had hoped. Yes, I can admit that the story is a little silly on the surface but I enjoyed every second of it.

I am really not a fan of love stories or romances at all, but this one was good. It's really different and old fashioned.

Recommendation: If you love the writing style of L.M.M, or if you are a fan of beautiful romances, then this one is definitely for you!
Posted by Pamela Burke at 10:00 AM No comments:

Death of a Policeman by M.C. Beaton 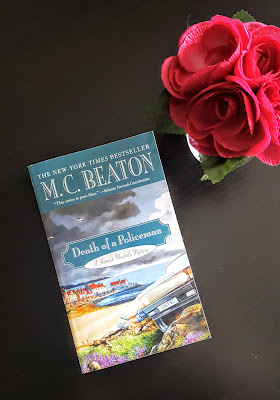 I have already covered my overall thoughts on this large series in a previous post (you can find it here) but I felt like I needed to write about this one specifically because its one that's worth mentioning.

I found this mystery to have a little more going on that some of the other ones. I found it to be a little more fun and different then her usual ones. The ending was quite surprising and I did not expect anything in the slightest.

One thing you need to know about Hamish Macbeth is that he likes his little village policeman post. He does not want a promotion even though he is responsible for solving most of the crimes. He is always at war with Detective Chief Inspector Blair who would really love to see him fired, but things take on a new turn in this one. There's a bit of intrigue, a bit of murder, a bit of suspense, and a bit of humor. I really enjoyed this one.

I am singling out this one in specific because if I had to recommend just one, it would be this one. It stayed on my mind for quite a while after I read it, and I think it might just be one I need to re-read!

Recommendation: If you were interested in good, easy to read
mysteries, grab this one. I do believe you will enjoy it!
Posted by Pamela Burke at 10:27 AM No comments:

A Wrinkle in Time by Madeleine L'Engle 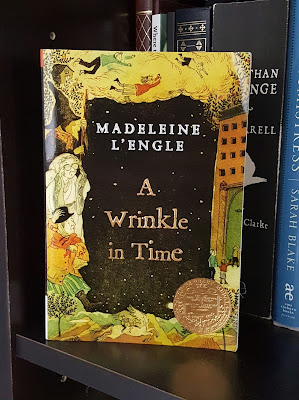 I didn't read this book as a child and I seriously wish I had. It is such an interesting and surprising read!

I had no idea how it was going to go and it ended up being a really surprising experience.

In case you haven't heard of this book before, its a children's book, like age 11 and up. It's a classic and it won the Newberry Medal in 1963.

It's about a girl, her brother, and a friend who go on a journey together after meeting this stranger. It delves into the idea of time and space and it's chock full of metaphors and super cool ideas. All I can say without giving things away is that you really won't expect what happens.

I really enjoyed this book. And its part of a quintet. I do wish the book was longer and a little more detailed but that would be my only issue. It most certainly is a hidden gem and a book that I think everyone should read at least once. Also: I can't help staring at this cover!

Recommendation: Read this. Doesn't matter how old you are or what you are into, I think you should read this at least once. It needs to be experienced.
Posted by Pamela Burke at 11:00 AM No comments:

The Giver by Lois Lowry 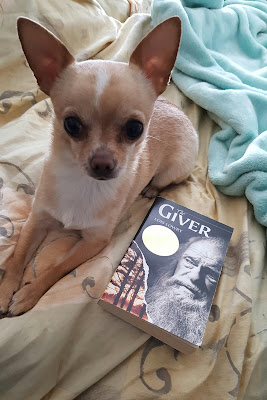 I thought I had read this one in school, but after reading it now I'm not so sure.

This is one of those books that we were all supposed to read as a child/teen. It won the Newberry Medal in 1990. Many consider this one a classic.

First off, I found the idea interesting. I liked the idea of community with no pain, war, or fear. Everyone knows what they are going to do. Every decision is made for you, but everyone is happy. The idea of a community that actually works this way is so strange that I am drawn to the story.

Of course someone needs to know what the world really is full of, and that is the job given to the main character Jonas.

What I didn't really like was the end of the story. I felt really let down. It was left so open ended that it just rubbed me the wrong way. I feel like it colored what I got out of the story and my memories of it. Not a terrible read at all though, I just didn't like the end.

Recommendation: If you found the story behind Divergent interesting, I think you would like this. Can't promise you'll love the ending though.
Posted by Pamela Burke at 11:00 AM No comments: 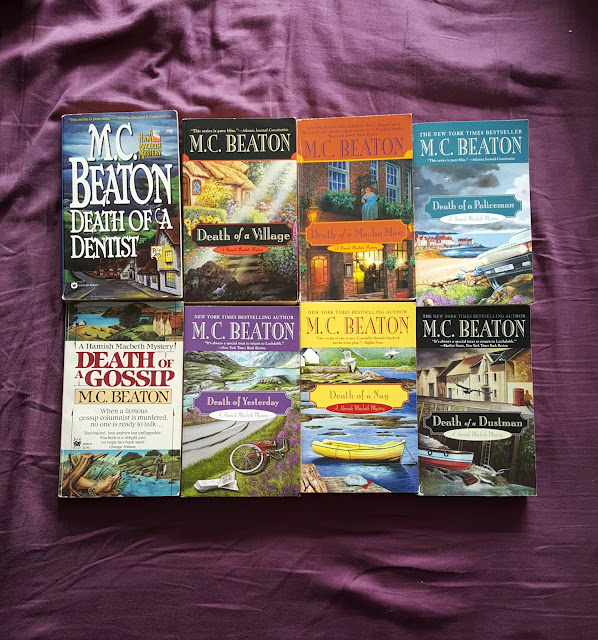 I adore these books. They are truly delightful simple reads that might be quick and easy, but are not short on entertainment.

This series follows fictional Scottish police man Hamish Macbeth who simply wishes to be left alone in his small station, walking his beat, and avoiding promotion. Of course it's not quite as simple as that because there is always a murder or two cropping up and he is the one to solve them.

Hamish is fair, honest, and good. He's a small village man who operates a little differently than most in stories that we read, but it just makes him all the more interesting.  The village is full of funny and interesting characters. Quite often I find myself laughing at loud at some of the antics in these stories. There's a bit of underlying love story elements that follow through the books, but for the most part, these can be read out of order which is bound to be the case for most readers because there are quite a few of these novels!

I have loved these from the first read and I cannot foresee a time when I won't still love them.  I don't tend to buy them unless I can get them second hand or as an e-book because they are quick reads for me (they only take me a couple hours) but if I can get my hands on a copy I can keep for a good price, then I am all over it! So far I only have these ones in paper copies, and a few more as e-books!

Posted by Pamela Burke at 11:00 AM No comments: 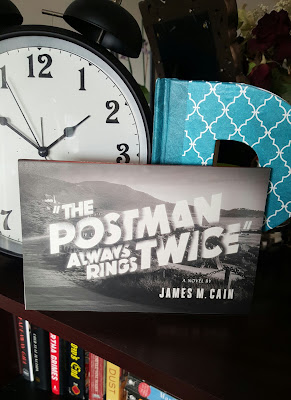 Recommendation: It's a classic murder mystery and deserves to be read and appreciated.
Posted by Pamela Burke at 12:04 PM No comments: