Into the Dim series by Janet B. Taylor 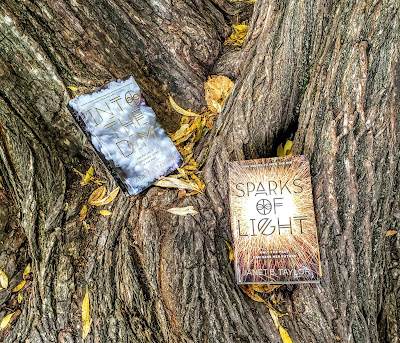 There are two books in this series and both have been out for a while. Book one is Into the Dim and book two is Sparks of Light. I did see there was mention of a third one on Goodreads (which I so hope is true) but I'm not sure if it's going to happen.

I came across this series by accident at the bookstore. I was looking for another author and the first book Into the Dim caught my eye, and I picked it up.

The series starts with Hope Watson. She's a teenager who has lost her mother to an earth quake and goes to Scotland for the summer to stay with her mother's family. Turns out that her mother and her mother's family are time travellers and it's going to be up to Hope to go back in time to rescue her mother who isn't dead, just in another time.

First off, the detail and the time traveling aspects of this series is fascinating! I loved the twists and turns in these books and I couldn't put them down! I was worried and excited about what was going to happen.

The first book was my favourite of the two, but I still really enjoyed the second book. I really fell for all the characters and I thought the romance aspect of the books to be seen and lovely.

I had to go back to the bookstore right after I finished the first book to get the second one because I needed to keep the story going.

This series has villains, family, courage, love, time travel, history, and more all beyond my wildest dreams. This series felt new and interesting to me in ways I haven't seen often.

What really surprised me was that I hadn't seen any of these books on bookstagram. No mention of them, no one really talking about them. For an awesome series about time travel and history, I would have thought otherwise.

The second book was great, but I did find myself becoming a little confused in the middle. It looked like the story was going in one direction but then went in a total different direction which I felt was jarring, but I ended up enjoying the outcome. You do have to read the first one before this one though. I don't think it would have been easy to follow the tangent of the story without having read the first one before this one.

Both of these books kept me glued to the page, and I really wish the third one would become reality. This really was a stellar series.

Recommendation: Read this if you love time travel, historical fiction, the weak growing strong and kicking butt.
Posted by Pamela Burke at 12:07 PM No comments: