A Throne for Sisters by Morgan Rice 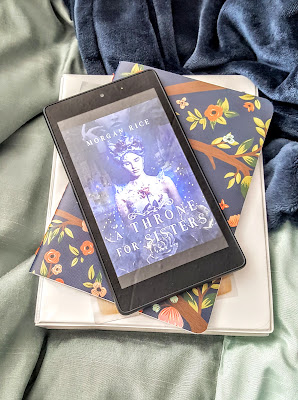 So let's just talk about Book Bub for a quick second. If you aren't signed up and getting their emails about super cheap and free(!) ebooks every day then what are you waiting for!?!

Anyway, this was a lovely freebie that I found through Book Bub a little while ago and I snapped it up. Partly because of the cover and partly because it sounded pretty cool.

This book is about two orphaned sisters who want to live the lives they dream of. They both have the special ability to read the minds of others, which comes in handy with their pursuit of their ideal fantasy. One sister dreams of the good life, living rich as royalty. The other dreams of a life fighting like a solider and being tough and brave.

This is a fantasy set in a world of its own, not one really like ours so it's got that older, almost medieval feel to it.

I have mixed feelings about this book though. I liked it, but I wanted more out of it. I felt like the main premise of the story wasn't fully resolved by the end, but it wasn't like a cliffhanger in the traditional sense. It just kept going then stopped. It's hard to explain. Like I was pretty into what was going on, but then it just kind of ended.

Without giving anything away, it was like things were working out for them and I spent a good chunk of time reading this waiting for the other shoe to drop because there has to be bad with the good. Then for there not to have been a final resolution in the end did kind of bug me, but I don't know if it was really compelling for me to read the second one, because what if it happens again?

I never really give star ratings for books but if I had to, I'd say like 2.5 or 3 stars out of 5. It was good, but there was just a little missing for me. I wanted more in this book without needing to continue the series to find out more. Needed some more meat on the bones for me.

Recommendation: It's an easy YA fantasy read. It had good elements and was interesting while I read it. I would get this at the library or like I did though if you're thinking of reading it.