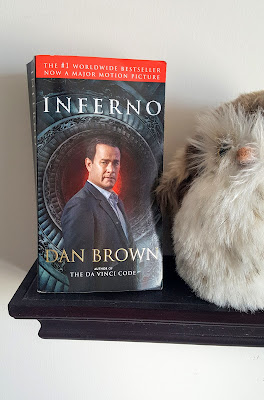 So I'm a little behind on the hype for Dan Brown as I hadn't actually read any of his work till I read The DaVinci Code way, way after everyone else had. Since then I've watched the movie version and watched Angels and Demons but I hadn't picked up any more of his work.

This book caught my eye on sale and partially because I figured it would be a quick and fun read, and because it was made into a movie, I snapped it up.

Robert Langdon wakes up in Italy with amnesia and with the help of a doctor he meets at the hospital he must race against time to recover his memories and save the world. The only clues are based on Dante's Inferno, the literary masterpiece. He must delve into the history and the past surrounding the man and his work of art to solve the puzzle.

Honestly, I have mixed feelings about this book. It was interesting and exciting, but at the same time, I was waiting for it to be over. Like maybe it went on a little too long in parts. I kind of feel like the history and the facts were interesting, but they were really heavy and detailed.

This was not as fast of a read as The DaVinci Code was. This book took me quite a bit longer than I expected. It kept my attention, but I don't know. Something was missing.

The twists and turns weren't nearly as amazing as I hoped, and the ending just didn't amaze me or thrill me like I wanted. It's as if it started out as such an amazing and crazy story and then it just dropped off all of a sudden and I don't know what happened. It fell a little flat and a little dull by the end.

I think I would still watch the movie if I came across it on t.v. or something, but I don't think that I would bother searching it out. I just felt like it wasn't enough but too much at the same time?

Recommendation: For lovers of Dan Brown, for lovers of thrillers that are heavy on history and facts, but perhaps not for the everyday sampler of books.
Posted by Pamela Burke at 10:00 AM

Email ThisBlogThis!Share to TwitterShare to FacebookShare to Pinterest
Labels: books made into movies, fiction, historical fiction