The Body Snatchers Affair by Marcia Muller and Bill Pronzini 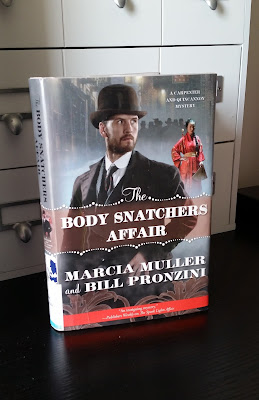 This book is relatively new. It came out in January of this year and I found it on a display in the library for new books. I snatched it up (no pun intended) purely based on the cover. I didn't even read the synopsis till I was in the car on the way home. Have to admit, its a pretty sweet cover.

The Body Snatchers Affair is the latest book in a series that follows Private Detectives John Quincannon and Sabina Carpenter through cases in San Francisco in the 1890's. In this book, there is also mention of Sherlock Holmes which of course I adore.

I won't go into too much with the plot because I don't wish to spoil anything but I will say it involved Chinatown and missing bodies. Overall, it sounded like a rather engaging read.

I read this novel in about 2-2.5 hours. It was an easy and short read for me. I have to say though, if it was a lot longer, I'm not sure I would have finished it.

I had problems with the writing. Often,when you read advice from authors they mention word usage. They say that you shouldn't use larger words when smaller ones would do. The authors of this book ignored that entirely. It's one thing to use a style of language that is suitable to the time period and the actual speech patterns the characters would have used had they been alive, and then there's just this book. The authors used constant slang and words that sounded down right pretentious. When the reader has to re-read passages to get their facts straight because of the non-stop slang, there's a problem.

It's one thing to have a high society gentleman use words like "badinage" and "raillery" but to have a character that operates like a bit of a thug who doesn't seem to be able to control his emotions use both of those words, one sentence apart, is just baloney. Put down the thesaurus. You aren't fooling anyone.

As far as mysteries go, this one was seriously simple. I had it 95% solved way before the end. Where it really bugged me was when one of the P.I's was given a lead to investigate, he doesn't bother. Not till the end. Maybe I could have forgot that he didn't follow through on the piece of info he was given, but the author didn't allow me to because they kept bringing it up. Every so often the P.I would wonder what the lead meant, but not once did he bother to look into it until the end. That's just not credible.

There was some talk of Sherlock Holmes in this book. Mostly the talk was the main characters calling Holmes an idiot and thinking he was nuts. Not a good way to insinuate yourself in the hearts of mystery lovers, I'm sorry. Especially when the author's own private detectives weren't doing such a good job themselves. They did throw Sherlock into the story a bit and he helped them out, so it kind of redeemed the hateful things the authors wrote about him, but still. Not cool.

I will say, on a positive note, that the characters were interesting. I enjoyed Sabina Carpenter the most and I was actually interested in her and what was happening. I just wish the story was better developed.

Recommendation: This book could be confusing at times because of the language used, and the story wasn't enough for me, but I won't tell you not to read it. To each his own, right?