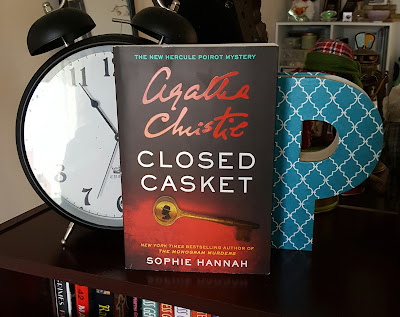 This is the newest Hercule Poirot novel by Sophie Hannah. This is the second one she has written and I didn't even know it existed! If it wasn't for some of you awesome people over on bookstagram that had snapped it up and photographed it, I would have totally missed this one!

Now, I love any and all Poirot stories. Doesn't matter if it's an Agatha Christie or by another authorized author like Sophie Hannah, I eat it up. This one I ate up so very fast as soon as I got it in my hands.

This one has all the hallmarks of an Agatha Christie. There's a strange cast of characters, over heard conversations, multiple mysteries inside of mysteries... all the good things we love from a Poirot.

That said, you need to read this. It was still such a good book. I am excited for the possibility of more from Sophie Hannah. I will never walk away from a Poirot mystery. It's just not possible. This one was good, but I think perhaps I'm picky when it comes to the famous Belgian detective.

Recommendation: If you somehow haven't read this yet but you are a fan of Poirot, then go and read it. Right now. Seriously.
Posted by Pamela Burke at 10:00 AM