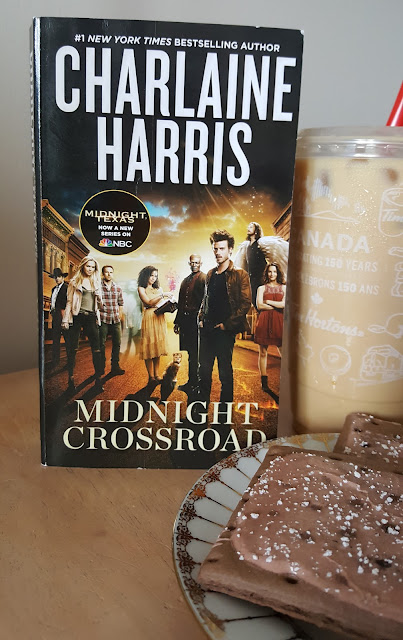 I'm sure you've heard of the new show Midnight, Texas that has recently come out, and you might even know that it was based on a series by the lovely Charlaine Harris. (You'll know her as the author behind the books that are the basis of the t.v. show True Blood.) As a fan of her writing and a fan of this genre and type of book/show in general, I wanted to read the books and watch the show so I grabbed this up as part of a deal at Chapters.

This book is about a little tiny town in Texas called Midnight and the strange and secretive people who call it home. If you've seen the commercials for the show then you might know that theres hints of characters like vampires and psychics. With the arrival of a new person to town, things start to evolve that bring some secrets to light about some of the inhabitants of this little town, both good and bad.

The book was good. I enjoyed it. It kept me glued to the page and I really wanted to know how things all turned out by the end. This book didn't take me very long to read, and I didn't really want to put it down.

I liked how the story came from multiple points of view, giving a look into the lives of people living in Midnight and gave more depth to the story. Everyone has their own mysteries that they keep to themselves so although it was a mystery surrounding one character, each character was like their own little puzzle. I'm still confused and curious about a couple characters and I hope that by reading the other two books things might become clear.

I do have a bit of complaints about the show, but I will admit to only seeing one episode and not having read any more of the books yet so I really shouldn't be voicing my opinion. I just felt that even in the first 20 minutes that things were so different than the book was and that does tend to drive me a little nuts. I had no problem with the choice of actors or anything that, my problem was the actual changes being made in the story itself. It felt like the changes were so Hollywood and it was a bit hard for me. I know that the author does have writing credits in relation to the show too and if she's happy with it, then who am I to judge. Nevertheless I am interested and I am going to stick with it for now.

Recommendation: This book was pretty good, and coming from the point of view of someone who didn't know anything about the book or show (my fiancee) the show was pretty good too. I'm a big advocate of reading the book before watching anything related to it, but to each their own. Still, this is for the urban fantasy mystery lovers out there. Give it a chance. You might be pleasantly surprised.
Posted by Pamela Burke at 6:42 PM