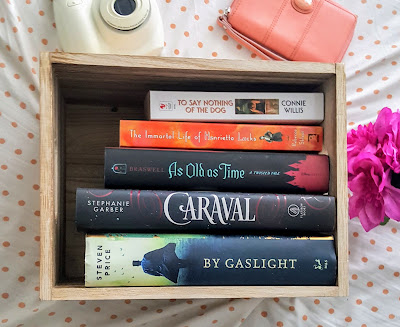 As you probably know, you can follow hashtags on Instagram now. I didn't really care much until #theunreadshelfproject2018 started up. I am totally following that hashtag and loving it. Also, you should be following @theunreadshelf herself who started this cool project with a couple of other really cool people!

The really neat thing I started noticing even a couple days into it was that people had some pretty cool and (in my opinion) obscure reads on their shelves that I know I haven't seen on bookstagram before. Not only that, but I had some of these same books on my shelves too!

Before bookstagram I only picked up books that interested me. I stuck mainly to the adult section, reading mostly mysteries, and occasionally the big talked about books that were on the shelves. I had some go to authors and often I only really broadened my horizons at the library or when family passed books my way.

Since joining bookstagram, I've expanded what I read quite a bit. For one, I find myself visiting the young adult section a lot more than I ever did. (I'm going to write a whole post on that soon).

Another thing I find myself doing is paying more attention to the new releases, and the popular books that everyone else is talking about online.

Honestly if I see a book mentioned over 5 times randomly on bookstagram I will go find out more about it. About 6 times out of 10 I end up getting my hands on the book, either from the library, in a cheap or free e-book form, or on sale at the bookstore.

Because of this I have quite a few book sitting around that were totally influenced by bookstagram that I still haven't gotten to, and quite a few I have read and totally loved.

Still though, true to myself, I do still creep around in the areas of the bookstore and library that I love and I grab up older books, books that I haven't seen anyone talk about, books that are totally all of my own finding.

If you've been following my reviews for some time you'll know that I review all different kinds of books, and I think that sometimes I might be reviewing a book that 95% of you won't have ever heard of or seen before but perhaps I might be more wrong about that then I thought!

Seeing some of the odd and little mentioned books on my shelves popping up in the unread shelf project hashtag is pretty darn cool! I'm so happy to see that we all have such different tastes!

Instead of abstaining totally from buying new books and only reading those on my shelf, I have made a couple new rules for myself because, let's be real, there's no way I could keep that up.

I've decided instead that there would be no more cover buys or picking up books on a whim because they are on sale. I am allowing myself to buy books that are new releases I can't live without, part of a series I already have/started reading, or books I've been wanting for quite a while.

I am being so much more mindful about the books I buy. I've gone to the bookstore recently and I actually had a hard time finding something. I had a gift card to spend and where I would have usually pounced on a couple things I came across, I didn't this time. I truly thought about books I have wanted or needed in a series and looked for those first.

I've got enough books now that I can almost treat my shelves like a library and come across books I've forgotten about and pick them up like new again to read. It's been quite enjoyable so far and I intend to keep reaching for my shelf!
Posted by Pamela Burke at 6:05 PM