Gazelle in the Shadows by Michelle Peach 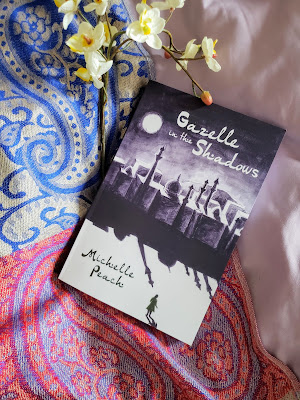 This book was sent to me ever so kindly by Kelsey from Book Publicity Services so that I could enjoy it and share it with all of you wonderful people!

First of all, I love the cover. It's purple, which is my favourite colour and it's reminiscent of the imagery from Aladdin.

In the mid 90s, Elizabeth Booth, a young British college student studying Arabic at Durham University, travels to Damascus to immerse herself in the Syrian language. Taken aback by the generosity and kindness of the people there, she easy slips into a life in the ancient city. She has friends, her studies, and even a handsome boyfriend. But things aren’t always as they seem. Soon, in a world where mistrust and disloyalty are commonplace, Elizabeth finds herself navigating a web of lies, betrayals, and a murder involving MI6, deadly terrorist factions, and the shadowy Syrian secret police.

Now, this book was largely based on the author's real life experiences, which I found to be so cool and so crazy all at the same time. Going to another country alone without any real concrete plans beyond attending a school while you are there fills me with crazy amounts of anxiety! I'm so glad others live exciting lives so I can sit at home and read all about them!

I'm not usually one to jump into a coming of age type of story like this one, but I enjoyed it. I was glued to the page, and I read it over two days.

The growth that the main character Elizabeth experienced was very transformative. We follow Elizabeth as she just gets on a plane and goes to Syria to learn without anything else planned. She is just going to go out there and do the thing. We watch her face new experiences, meet new people, and fall into trouble. This book brings you back to a time when you might have thought you had everything all figured out, but later on you look back and realize you really didn't, but you lived through it.

Before this book, I didn't know all that much about Syria. It was iwonderful to experience it through Michelle's eyes. I could almost see the landscape, the homes, the buildings, and the people. It was a descriptive journey that I won't soon forget.

As far as the intrigue, the secrets, the lies, and the betrayals... I was not disappointed! I had an idea of what was going to happen but how all the pieces fitted in together was a bit of a surprise, which is great! I'd say more, but I don't want to spoil anything!

Recommendation: For the lovers of coming of age stories, for those interested in Syria, for those who like stories about travel and peril in another country. This is the book for you!