Wicked Saints by Emily A. Duncan 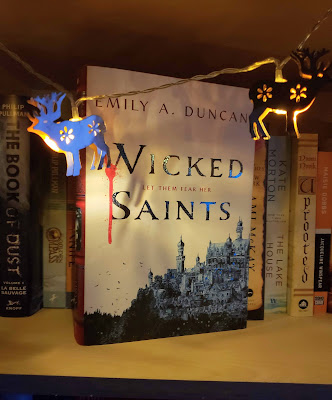 Okay, this book was partially a cover buy and partially because when it was released it was all over the internet and the storyline just begged to be read.

For those of you who don't know it's about a girl, a boy, and a prince. Together they have to work together to assassinate a king and stop a war. The girl can speak to the Gods, the boy has a pretty monstrous secret and the prince has a lot to learn about who to trust. It's got romance, gothic feels, and its the type of fantasy that I love with plenty of magical things going on.

Right off the bat you get thrown into the action. There's a war going on and don't you know it!

The magical element was really different too, and I totally loved it. Having a story about a girl (and culture) of people who, when chosen, can speak to the Gods and use their abilities was pretty seriously great. The other magical element of having people who use their blood to activate spells they tear out of books they wear on their waist was so neat!

The writing in this book was something really great. The way the author wrote the characters, it was like you knew them immediately and you developed feelings about them so fast that when something happened, you could really feel for the characters. This was especially apparent with the villains. One second you feel one way and then it's call different! I won't say more, you'll just have to read the book!

The story was so built up that I was in a hurry for the ending because I NEEDED to know what was going to happen. This meant that the ending didn't quite satisfy me. I've since learned this will be part of a trilogy, so it makes sense the ending I was after didn't quite happen yet.

It's also possible I'm missing something in the ending because I read it so quickly. I think I might need to revisit it, especially before I read the next one when it come out. I will admit that when it was over I felt like I was missing something.

Overall, I really liked this book! It was an interesting and different gothic fantasy young adult read and I enjoyed it! I will definitely read the rest of the series when it comes out.