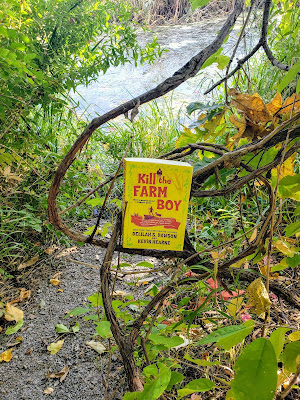 Kill The Farm Boy is an adult fantasy novel that is also 100% comedy.

The idea behind this book was to turn a typical fantasy on its head. There's always a farm boy who becomes the chosen one and with a band of characters to help him along, he saves the kingdom and becomes king. This is not that story.

Let's start by talking about some of the main characters: there's an assassin who is afraid of chickens, a warrior woman in a chain mail bikini, a necromancer who is called the Dread Necromancer Steve who has a thing for cheese, a talking goat and (as the synopsis says) a bard with a fuzzy tail.

The story itself was pure gold. There's innuendos and comical scenes. The characters were hilarious and perfect for the story. The world is rich and interesting, with many layers like a typical fantasy. It's lighthearted and laugh out loud funny while still having a plot and a goal in sight.

I did find myself getting upset at a certain choice in the book, but it's a personal preference thing that has nothing to do about the story or how good the book is. I won't say more but I feel like if you were to read this book you'd know what I'm talking about and will want to vent about it too!

All that to say I enjoyed this book and will most likely be reading the rest of the series at some point next year!

Recommendation: For the lovers of fantasy, those who love humour, and can be light hearted and less serious about life and fantasy stories in general.
Posted by Pamela Burke at 7:56 AM