Murder and Mendelssohn by Kerry Greenwood 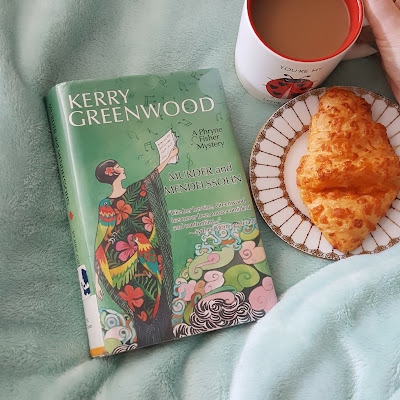 Stop reading right now if you are totally sick of Miss Fisher's murder mystery reviews. I'd apologize, but honestly, I'm not really sorry I'm reviewing another one! They are just too much fun!

This one was a little different than the usual ones. This one featured an old friend of Phryne's from her time spend in the war. The interesting thing was her friend now has a companion who, as it turns out, is a little like another famous mystery character that most of us know and love! (He resides at 221B Baker street) It might actually bother hard core Sir Conan Doyle fans, but although it was obvious the relationship between her characters was based on those famous men, they were still written different enough to be their own separate entities.

I will say that moments got a little weird, a little overly sexual is the best way to describe it, and although I could have done without a lot of that bit there in the middle, it was a good book.

The mystery might have been a little secondary to the storyline of the two gentlemen, which, depending on what you read these books for, can be a little tiresome. I, for one, love the stories about Phryne and her entourage as much as I like a good old murder mystery. A bit of drama and romance is alright by me (at least when it comes to these books!)

There was a choir, a ghastly murder (or two), some romance, old flames, new flames, spies, the war, and much more in this one. All in all I'd have to say it was a pretty darn good book!

Recommendation: As always, lovers of murder, of old time divas in spectacular clothing, women living life to the fullest for themselves, and a great story will love this book and this series as a whole!
Posted by Pamela Burke at 4:39 PM