Blood and Circuses by Kerry Greenwood 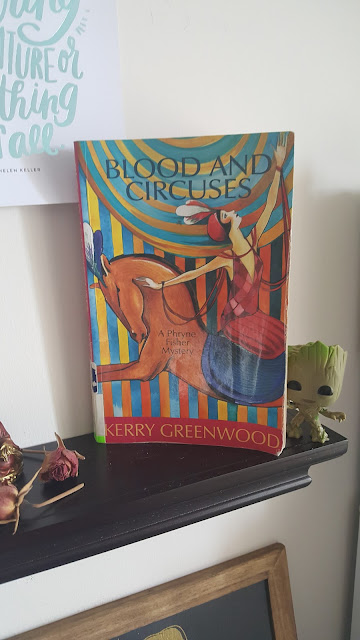 Here we meet again, for another conversation about the Honorable Miss Phryne Fisher and her entourage of awesomeness that reside out there in the 1920's Australia.

This one has Miss Fisher going under cover without any back up or help in the Circus to solve the murder of one of the members of the band of misfits that make up the circus. She finds herself utterly bored and when a friend from her past shows up with a problem, she decides she should help. Mr. Christopher has been murdered and it's going to be pinned on the wrong person. In order to solve this mystery she has to join the circus. She must learn to stand up on the back of a horse for the show while trying to fit in and learn all she can about the victim and who might have wanted to kill.

They did an episode of the show about this book. Having seen it and now having read the book they are two very different things. Usually that totally annoys me but I'm not bothered as much in this case. The book dealt with some pretty serious emotional things that just wouldn't have translated as well onto the show. I found this book to be much darker and more serious at times than the show, or even a lot of the books tend to feel.

I felt like this book brought me through a much larger emotional journey than I was expecting. I don't want to say more about that, because I don't want to give anything away. This book just wasn't as cosy and as light as a lot of them usually are. It touches on some rough and tough serious and dangerous things that surprised me, and really hit me hard while reading.

Recommendation: If you haven't read any of these books yet, don't start with this one. If you're familiar with the greatness that is Phryne Fisher, then have at it. It was hard but good.