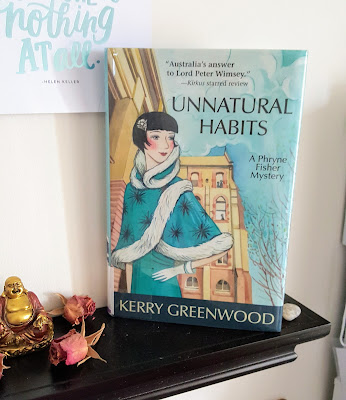 Well, hello! We are back with yet another Phryne Fisher murder mystery review! This one is the 19th book in the series and it's another book that is the basis for one of the episodes of the wonderful show.

The show is only what, an hour long? It makes sense that the books will have a lot more substance and detail in it than the show did. This was of course the case here.

This one deals with missing girls. They are pretty girls who have found themselves pregnant and in trouble. They were staying at the convent for wayward girls, being forced to work in the laundry which is one of the sources of income this convent uses to "take care" of these girls. Once they leave there and go off to another place to have their babies, they all go missing. The book starts with a female reporter on the hunt for these missing girls. It's not till the reporter goes missing too that Phryne steps in and takes up the hunt for these poor girls.

It's got murder, lots and lots of intrigue, and a whole lot more going on than the episode of the show did. I read this in about 3.5 hours, I almost couldn't put it down. It was a little darker than the show was, but it's got the same type of story to it that the show did. Don't start thinking you should skip this one because you know how it ends from the show, because you would be doing yourself a disservice. The book has so much more to it!

Recommendation: Read it. Just read it. You know you want to.