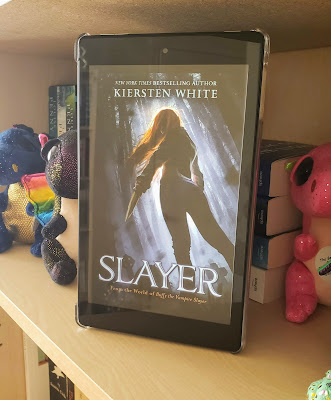 This book just came out recently and I am so happy its out in the world! I had requested this book on Netgalley and I was quite happy that I was able to read it last year!! I used to watch Buffy on TV as a teen, and since then I've renewed my interest in it.

This book is about The Watchers, the ones who are left, and the last Slayer to exist after Buffy. Basically things are in shambles due to what Buffy did (which since I haven't watched the whole show I have no real frame of reference for) and it follows the lives of Nina and her twin sister Artemis who grew up at the Watchers Academy. There are only a small number of Watchers left, and they are focused on being ready when needed for any future Slayers.

Nina gets quite a shock when she discovers she's the last Slayer. Ever.

There's demons, monsters, all the baddies from this world you could think of. There's betrayal, secrets, and anger. It's one heck of a journey.

I read this all at once and I liked it. There were moments where I was wondering why bits were necessary, but I think perhaps there's a larger story at work here and as the series goes, more will be known.

Slayer was well written. I was glued to the page and had to finish it in one sitting! It's just one of those engrossing reads that pulls you out of your everyday life and throws you into an adventure to the point where you forget your troubles.

I'm happy to have read gotten the opportunity to read this before it was released. It wasn't what I was expecting but it was quite good!

Since I've only just begun to re-watch all of Buffy, I am looking forward to needing to re-read this novel again once I'm finished, and to follow along with the series!