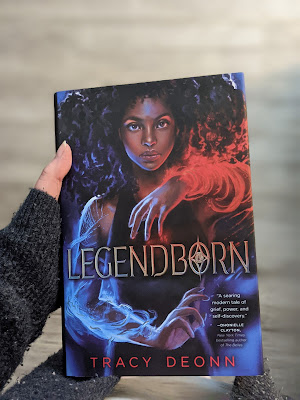 This book was amazing!
I received a digital copy from NetGalley and Simon & Schuster Canada. I was really excited to receive this one because it's a book written by a Black author featuring a Black main character.
I started reading it closer to the release date and I was enjoying it so much I went out and bought a copy on release day! Then I realized I had barely got a third of the way through, which was wonderful, it meant I had a lot more of the story to read!
First off we have a super smart sixteen year old who gets into a residential school program for smart kids at a college, while trying to deal with the death of her mother. Then throw in magic, Arthurian legend, queer and non-binary characters, a Black main character and it's my favourite YA read of 2020!!
This book had everything! It was an urban fantasy that gave you reality and magic in such a way I was never bored, and completely enthralled.
The romance was pretty darn great too. Sometimes I feel like it can be an afterthought or just a bit off when it's done in fantasy books, but this one did it well!
The character exploration and background that was added in gave so much to the story. I love the way the author incorporated genealogy and ancestry into the story. That gave it another level of greatness that I looked forward to even as much as the other magic stuff. Honestly, I don't think there was a moment in this book where I got bored or felt like it was filler to get to the main story.
Then there was the ending!! Suffice to say I need the second book. As soon as it's released, I will have it in my hands. There isn't even a title for it yet, or a release year even. Still, I need it!!
This will be a book I will happily re-read when the next comes out so I can experience it all again.
Recommendations: For those who like urban fantasy, King Arthur and Merlin, and different magical systems, this is for you.
Posted by Pamela Burke at 5:14 PM