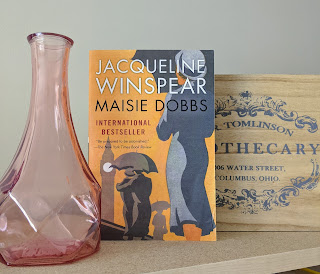 Maisie Dobbs is the first book in a historical mystery series by Jacqueline Winspear. The series follows Maisie Dobbs, a former servant turned detective in 1929 London.

I believe there are/will be soon 16 books in this series. You know I love a big series. When there's more than 10 books in a series in a genre that I love, I HAVE to see what the fuss is about. Knowing that so many love this series, I picked up the first one, expecting to fall head over heels for it.

That didn't quite happen.

The series starts with Maisie opening her own business as a detective and lands her first case.

The writing was different than I was expecting, and in some places I found myself re-reading passages because they were just so beautifully written. I fell for the wording, time and again.

The mystery was okay. Not as thrilling as I tend to like. It was a bit wrapped up in a lot of emotions, and caused Maisie to reflect on the war. I didn't mind it that much at first, except after a while the story moved away from the mystery and into a historical fiction story. Again, I enjoy historical fiction, but when I'm here for a mystery and I get something else, it changes how I feel about the book.

I found it hard to connect with Maisie. I wanted more depth, more about her that goes deeper than the war.

Overall, it was a good book, but I didn't find myself running to the store to buy up all the books.

I think I will read another one though. I feel like this is a series that if I had come across it at the library, and accidentally picked a book in the middle of the series, I would have fallen in love with it.

Recommendations: For those who love historical fiction with a bit of mystery.