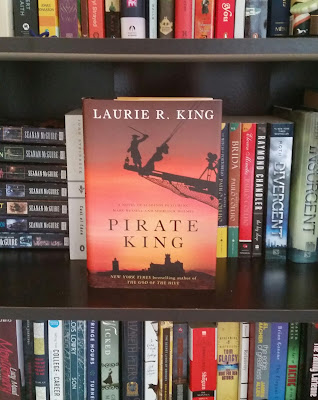 This book is part of a series written by Laurie R. King that tells tales of Sherlock Holmes and his wife Mary Russell. According to this author, Sherlock is married, and the stories are being told from her point of view. She helps with his investigations, and in some cases, carries out her own investigations.

I will tell you right off the bat that these books feel like you are reading a Sherlock Holmes novel. They have the same feel that we lovers of the famous detective seek out in stories about him. It is perfectly lovely, and a little refreshing, to have a story about him told by the point of a view of a woman.

This particular story has Mary travelling with a film crew as they head out to sea to film a pirate movie. She is there to keep an eye on things, as asked by Sherlock's brother Mycroft, but the true nature of the game that is afoot is kept secret.

Mary herself is like a female Sherlock. She's smart, quick. no nonsense, and always on her toes. As a protagonist, I really enjoy her. This book kept my attention for hours. Time just flew by as I was reading. This one, and the others, are just so well written and interesting!

Recommendation: These are must reads for every Sherlock fan. Honestly, you won't be disappointed!
Posted by Pamela Burke at 10:00 AM