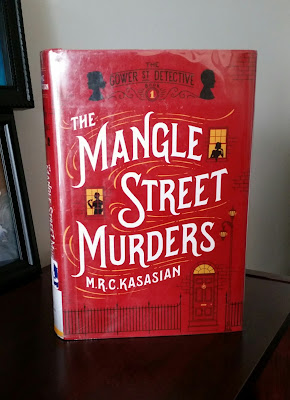 I picked this one up at the library purely based on its cover. Then I found out it was set in London in 1882 and I was super excited to read it.

I found out later this one is first in a series about a personal detective named Sidney Grice who takes in a woman who is the daughter of a friend when she has no where else to go once her father dies. She demands that she be part of his investigations (much to his great annoyance). The ensuing mysteries follow their time together.

Sidney Grice comes across as very pompous and self absorbed. He has a lot of Sherlock Holmes type tendencies but not quite the same amount of humanity. Sidney really does seem more self absorbed. Like Poirot, Grice is friends with a police chief and works with him to solve crimes.

The mystery itself was good. I figured out bits of the crime before it was revealed but there was so much more to it which happily surprised me.

There are bits that happened that neither Poirot or Sherlock would have let happen which kind of bugged me but it wasn't a bad book.  If I came across another one of his books I would probably pick it up at the library but it's not on my hit list.

Recommendation: Not a bad read. If you like the genius and callous detective type novels set in the 1880's London who get stuff done, then read this!
Posted by Pamela Burke at 10:00 AM