I've been a big fan of the t.v. show Bones since it came out but until recently, I hadn't read any of the books that the show was based on. If you didn't already know the show (and the books) feature Temperance Brennan who is a forensic anthropologist. The similarities between the show and the books pretty much stop there. The books feature different characters, the main character has different personality traits, and where and for who Temperance works is different. The books follow the actual career of Kathy Reichs more closely than the show does, which isn't really a negative for me. I'm happy they aren't exactly like the books. I do wish though, that the two could have been a little more the same. 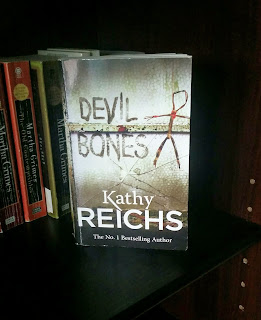 I picked both of these books up used at the same time but Devil Bones was the first one I read. I found it interesting. The story line featured some voodoo/magic type stuff which is always interesting in my book.

The down side I found was it was a lot like other thrillers of this type. It followed the same type of plot twists, the same type of ending, just overall the same feel as others I've read like this. It was an easy read and enjoyable at the time, but it just didn't stand out to me.

I didn't exactly solve the mystery before it was revealed but I did feel like it was something I've read before. I think perhaps I was expecting more from the book because I love the show so much. 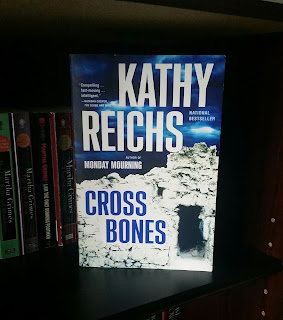 I did my best to go into reading Cross Bones with an open mind. After all, I didn't know enough about this author's writing to make an overall assumption on her work. This one was  different for sure. This story focuses on Israel and the skeletons of what could have been Jesus and his family.

Kathy spend a year researching this book, even going to Israel herself. All the information relating to the bones and their details was actual fact, which I thought was pretty cool. I did find it a little heavy handed at times with the repetition of the facts as she did include a little fact sheet at the front of the book besides telling us more than once each little bit of information.

What kind of bugged me was that it felt like the mystery of the present day dead man killed in his warehouse fell way down by the wayside with the trip to Israel and the talk of the very old bones and who they could have belonged to. The murdered man's mystery was solved by the end but the mystery of the old bones has never been solved in reality so it wasn't solved in the book and it left me feeling like it was an incomplete story. It just wasn't really a favourite. I don't think I'll be collecting the series and adding them to my library.

Recommendation: Not bad reads. Entertaining for what they are but just don't expect them to be super similar to the show. Good if you like medical mystery/thrillers.