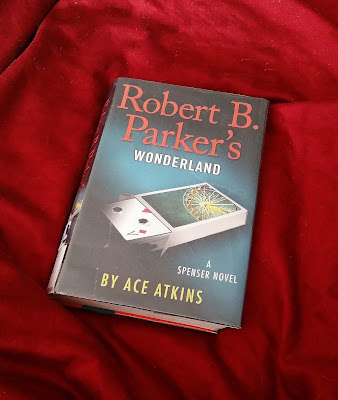 My mother was the one who introduced me to the novels by Robert B. Parker years ago at the library.  I was just getting into reading adult novels, and as he wrote mysteries, I ate them up.

He wrote about 70 novels in his time, passing away in 2011 I believe. He was known (as his website says) as the dean of American crime fiction. Many of his works were best sellers. Three of his series that I've read and enjoyed were the Spenser series, the Sunny Randall series, and the Jesse Stone series. The Spenser and Sunny Randall books follow their respective protagonists who are private detectives, and the Jesse Stone books follow a policeman of the same name. I do believe one or two of his Jesse Stone books were made into made for tv movies (if I remember correctly, but I could be wrong).

Now, there are multiple authors who are taking up his mantle and continuing on his work (with permission from his estate of course) with some of his series. This book is part of his Spenser series, and was written by Ace Atkins.

I am always leery about books written by someone else after an authors death. Especially in this situation, because the writing of Robert B. Parker was so different and unique in my opinion. I was curious to see if someone else could really accomplish what Parker could.

In my opinion, this was well done. If you have never had the pleasure of reading anything by Parker, I recommend you grab one from the library. His books can be read out of order without much of an issue, which is always good. He writes in such a way that less is more. With little words, he can convey big ideas. His detectives are flawed and different, but perfectly the stereotype of the American P.I. They are wonderful reads. Quite easy and quick reads too.

The characters all have their own codes of conduct as it were and his stories follow a certain type of formula. I was happily surprised that Ace Atkins accomplished everything that Parker did. It was well done. I do believe I will pick up more of these at the library when I see them.

Recommendation: I would check out the works of Robert B. Parker. He was a brilliant and prolific writer. Especially if you like reading about private detectives.
Posted by Pamela Burke at 10:00 AM