Death of a Wine Merchant by David Dickinson 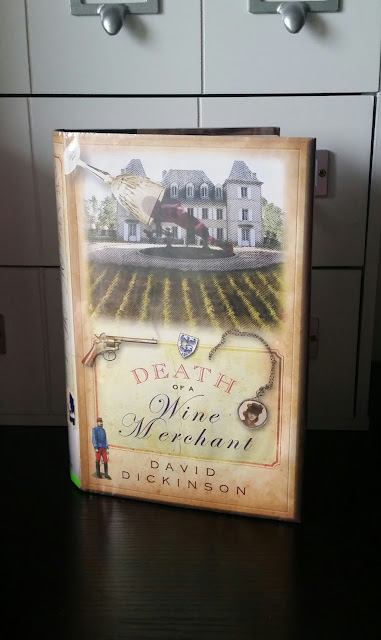 This was another cover grab at the library. I knew nothing of the author or the book when I picked it up. As it turns out this one is the 9th book in a series featuring a Lord Powerscourt. He's an investigator of sorts that, in this book, has come to the aid of a friend who is defending an accused murderer in court. The friend does not believe that the accused has committed the murder, but the accused won't talk in his defense, and there is some doubt about it.

It is another mystery set in England in the past. The characters are interesting and I would have loved to read more about their backstories. I did find that it was a little long and slow in some places. It was as if in the first 50 pages the mystery was announced, the supposed murderer was caught and almost everything was investigated. There were a couple twists later on, but it felt a bit like it was dragging.

It wasn't a quick read, either, and it felt kind of tedious at times. I don't know if I missed it, and it went over my head, but there were things that I felt didn't get resolved. I kept reading because there was a little side plot going on with someone who's identity that was concealed, but I didn't seem to find out who it was. I know I was losing interest by the end, but still.

I don't know that I will be in a hurry to read another one, but if I do come across more of these books, I might pick one up.

Recommendation: It's not the best, but it isn't the worst. A fairly good mystery with interesting characters.
Posted by Pamela Burke at 10:00 AM