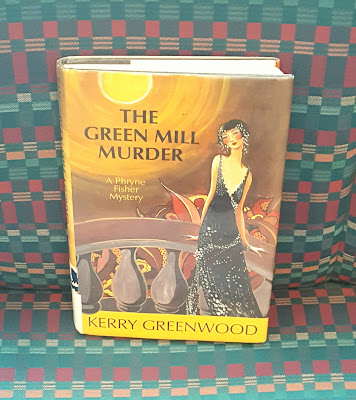 This is one of the books that is covered in the t.v. series although I don't really remember the episode fully, but I do know one of them is like this book.

It's another Phryne Fisher mystery (yes, yes again. I know. I love them thought!) and this one is about a murder that happens right in front of her at a dance competition at the Green Mill club. The story follows two different paths and she ends up investigating two different cases at the same time.

This one wasn't my favorite, but I think part of the problem had to do with the fact that the copy I got from my library in town was one of the copies that is missing the final chapter. I had to go on Good Reads to figure that out because I was a little lost as to why the murderer wasn't revealed in the end. I guess it was a problem back when they were printed and readers who find this out should contact the publisher to get a hold of the last chapter. I haven't done that, but I still may.

I will say that this one leans a little more to the romance side of things which does happen occasionally with this series.  This can be good or bad depending on how you look at it. I don't mind it much in these books, but this one was heavy on that, less heavy on solving the crimes.

Still in love with this series though!