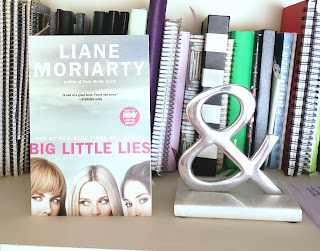 I might live under a bit of a rock. When it comes to having read the popular books before they end up being made into t.v. shows and movies, I am way behind. I am never on top of these things till way after everyone else has read and watched them.

Case in point: Big Little Lies. A big chunk of the reason I only just got to watching the show was because I was confusing it with the name of some other show I really didn't want to see. It wasn't until I realized that Reese Witherspoon and Nicole Kidman were in it that I had any interest.

While I was on vacation in North Carolina, I picked up this book on sale in a Barnes and Noble (which was totally cool to finally go to one of those book stores!!) and I figured I would give it a try.

Well, let me just tell you I read the whole thing in one sitting. Took me around 3 hours. Then I went right to my t.v. and binged the entire first season, all in one day.

The book is good. It's weirdly interesting. It's just a story about some people and what's going on in their lives. It's a bit of a mystery, it's a bit of a drama, it's a bit of suspense. Pure, honest, and real drama on the page.

Like if you break the book down in it's barest parts its just a few weeks in the lives of a group of women. So basic, yet so rich and colorful and riveting.

The t.v. show, however, was a little lacking for me. Obviously, that's because we all know the book is better. How could it not be? Some of the choices with adding in extra storylines and then how the ending was executed left me a little sad, but overall, I think it was done well. I'm guessing some of the additions and such were done because they wanted to feed the flames for a second season. Which I know I'm going to watch because I'm in it now. There's no going back.

Recommendation: For fans of this author, for fans of murderous stories about average people, for the lovers of drama. This is for you. Sidenote: If you've watched the show and didn't love it, read the book. The book is always better!
Posted by Pamela Burke at 10:00 AM