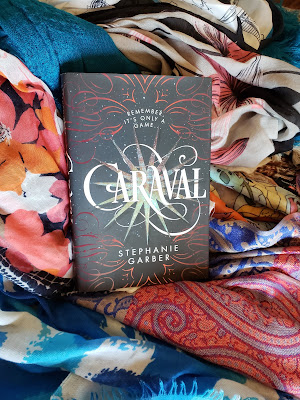 I'm actually really surprised that I haven't posted my review for this book yet! The next one is already out and I haven't yet got my hands on it, but I hope to fix that soon!

For those of you who haven't grabbed this one up yet, it's a little like Alice in Wonderland if it was written for a more grown up audience, full of intrigue and secrets, with a little bit of real life pain and romance thrown in.

It was so clear that we don't actually know everything even though it was perhaps supposed to feel like we did. We are told things aren't like they should be, but do we listen? I found myself thinking logically and getting totally surprised (which I love). There's so much more waiting under the surface of this story that needs to be unveiled. I am so glad there's a second one because by the end of this, I had so many questions and I need to know more!

There were moments that felt a little long though, mostly about how long it took the main character to actually get things together and find her own power within herself, but once she did, it was great. Totally a book you need to go into with the goal of finishing it because it's really worth it.

I think it was really well written, it accomplished all it set out to do and its totally worth a read!

Recommendation: Read this. It's different and weird and cool all at the same time. For fantasy readers, the ones who like everything to be a bit weird and secretive, for those who just want to be swept away for a little while.
Posted by Pamela Burke at 10:00 AM