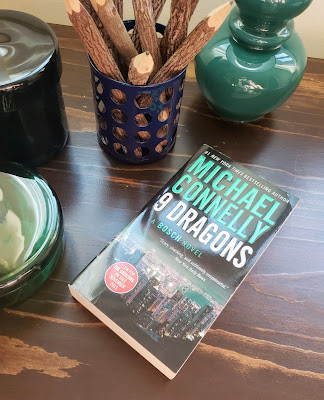 This was the second book that I picked up in the Harry Bosch series by Michael Connelly. This one is actually book 14 in the series.

Again, I really need to read these all in order. I was still getting a feel for the series though before I jump in and start over at the beginning.

Honestly, I love detective novels, murder mysteries, all of that. However, this one was really heavy handed on the violence. I think I felt that way because I tend to read a lot of cosy mysteries that might have murder, but never overly violent ones.

This one follows Harry as he's investigating the shooting death of a Chinese liquor store owner. Then, his daughter who is living in Hong Kong with her mother, goes missing so Harry flies to Hong Kong to save her.

The details were pretty interesting. I really liked reading about the journey in Hong Kong, I found that really compelling. No idea how actually realistic it was, but I was still intrigued!

Another easy read, and I enjoyed it but there were some details that I think were lost on me because I haven't been following the character along over the series.

I'm still undecided on my overall feelings about this series. This is the third book I've reviewed in this series and I'm not sure how I feel. I loved the Lincoln Lawyer series which I seem to have forgotten to review on here and I will rectify that very soon.