The Grisha Trilogy by Leigh Bardugo 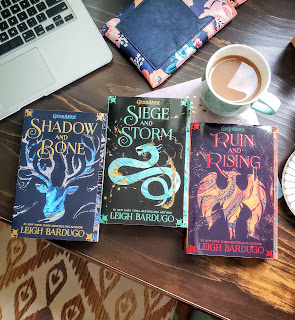 This series in a word: AH-MAZE-ING

Every single moment of these books kept me glued to the page. I was totally along for the journey, no questions asked. I was all in.

I feel like I was one of the last to this book party when I finally picked these up, but I am so very happy that I did.

This series is about a girl named Alina. It's set in a universe with Russian feels (that I adored). It involves magic, the people who wield this power, the pursuit to defeat evil and restore the good to save the people.

Yes, it sounds like the basic fantasy type of story, but I assure you, it is not. Nothing is quite what it seems, things aren't clear cut and rosy, it's not the usual.

I'm not going into the actual story too much (as always) because I don't want to spoil anything, but I will mention that I was pleasantly surprised what this series had to offer being that it was YA. This series was one of the biggest reasons why I'm reading more YA. 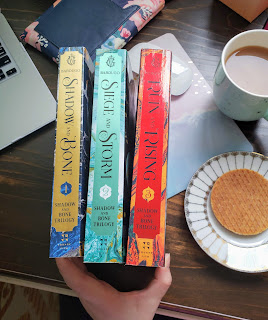 I know there's so much love for this series on bookstagram and it kind of surprised me that there were so many long and heartfelt reviews about (at least the first book) people hating it. They say that the romance was terrible, that Alina was hard to get behind, that the world building wasn't great, but really? Like, what?

Usually, I don't enjoy a whole lot of romance either but it wasn't that much, and it didn't bother me in this series because it wasn't really the main focal point. I think a lot would have been missed without it.

The world building was epic. End of story. The Russian feel of it was so neat. I really enjoyed it.

I currently own all the books Leigh Bardugo has got out in the bookstore right now and even though these are the only ones I've read so far, I am on board with her for life.

Recommendation: Read these. Also these editions are GORGEOUS so what are you waiting for? For the lover of fantasy. Just, read them!
Posted by Pamela Burke at 10:00 AM