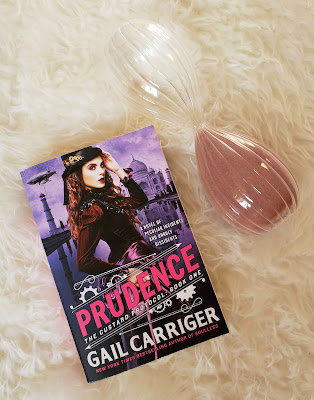 Hopefully you'll already be acquainted with Gail Carriger's other series The Parasol Protectorate series, but if you haven't been yet, that's okay though you should rectify that as soon as possible. I'll be posting my thoughts on that series very soon as I just realized I had not yet talked about it on here!

That series and this one are both set back in the day when women still wore bustles, sent out cards before going visiting, and when there were rules to appearing in society. This one also features a few supernatural creatures of the werewolf and vampire variety.

This book is about a young woman named Prudence. She is given a dirigible and is sent off to India in pursuit of a new, delicious kind of tea. She assembles a crew and off they go. She stumbles onto some very interesting events and ends up involving herself in dire situations to sort it all out.

The thing about this is Prudence is the daughter of the main character in The Parasol Protectorate series, but it's not fully required of you to read the other series first (thought I recommend that you do).

The author's writing was wonderful, as usual. I found myself laughing out loud at times, enjoying myself immensely. It's quite the steampunk, supernatural, polite society read.

Beyond that, though, I had some problems. First, there are reoccurring characters from the other series. However, they felt weird to me in this series. Like I couldn't really wrap my head around the fact that I was reading about the same characters at some points.

There was also so veiled allusion to happenings from the previous series that kind of passed over my head, like I should know to what she was referring, but I wasn't sure that I did.

Overall, this book was good, but it wasn't the wonderful, amazing thing for me that the first series was. For what it was, it was a great story. I almost wish the author created a totally new person in the same world without bringing back in the other characters and then wrote this story, because I think I could have fallen in love with it then.

Recommendation: If you've read the other series, still read this. You might love it more than I did. If you love steampunk supernatural stories with tea drinking society women in fancy dress, you'll enjoy this.