In the Shadows of Paris by Claude Izner 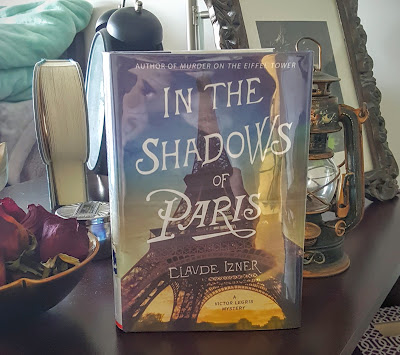 I grabbed this one at random at the library mostly due to the title. Once I saw the cover though, I had to read it. It's just so pretty.

Turns out this is the fifth book in a series featuring one of the main characters Victor Legris, a book seller. It's written by two sisters who go by the pen name Claude Izner. This book is about the bookseller who solves crimes occasionally, and when people start dying, he and his protege step in and help solve the mystery.

Let me start off by saying there are 71 footnotes in this book. 71. It feels like there's one on every page and I found that quite annoying. These notes reference language translations. literary references, historical references etc. that I really could have done with out. If you have to explain something after you've said it, maybe you shouldn't have said it?

This one was so hard to get into that I almost gave up twice before I was even 50 pages in. The authors switch characters so fast, and with little warning, that I had to keep going back when they finally gave people names to try and figure out who was who. Right at the beginning they go back in time to an event that, in my opinion didn't even link up the way they thought it would later on. It just seemed like extra information that maybe we could have done without.

Once the characters were fleshed out, I found myself drawn to them. That was the reason I finished the book. I really wanted to know what would happen to them, specifically one of the criminal characters. By the end though, the one criminal character had such a flat ending to his story that it just bugged me.

The whole thing just felt over complicated for nothing. It was just so mediocre in my opinion. I don't think I'll be picking up any of the other ones in the future.