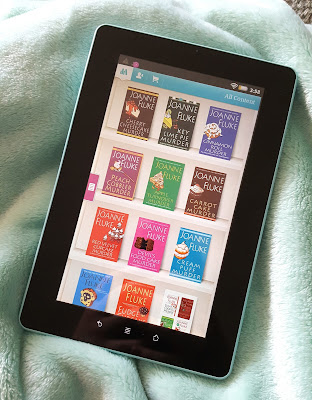 I have been reading this series for years now. These mysteries are focused around the main character Hannah Swensen who is a baker living in a small town. She owns a cookie shop and with the help of her sisters, one of the two main men in her life, and her awesome detective skills, she solves mysteries. Quite often she even manages to find the bodies herself! Every book is full of recipes for delicious baked goods, even some other great dishes, that are mentioned in the story. As such, each murder mystery is named for a key baked good that features in the mystery.

I own a good chunk of the series as e-books. I tend to read them in the middle of the night when I can't sleep on my phone or my e-reader. They are fairly easy reads that aren't overly complicated and because of that I prefer to get them from the library or on my e-reader.

I find these books to be rather light, they tend to follow the same kind of formula, with a lot of the same characters. I don't mind this though, because even though they are pretty simple, I don't tend to figure out the end before its over which is something I look for in a good mystery. I don't want to be able to solve it early. There`s a lot of repetition as far as things go with the characters, but the author stays true to them, they never come off feeling fake.

I guess they've made one into a made-for-TV-movie... no interest in watching it. At all. I saw the cast, and it doesn't make any sense.

These are fun little reads that make your mouth water with delicious recipes.

Recommendation: Perfect for the lover of sweet treats and light mysteries.

If you were wondering which of her books are in my e-book library, here they are (in no particular order):