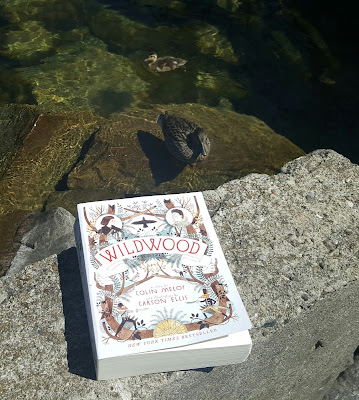 This book caught my eye on Instagram and I adored the cover. I know this is technically a kids book, but some of the best so often are.

I really liked the idea behind the story. It's about a young girl who's baby brother gets kidnapped by crows and taken into the impassable wilderness outside of town and she must go in to find her brother with the help of a friend from school.

Yes, like others, I thought of Labyrinth too (girl rescuing her baby brother from a magical creature anyone?) but it also reminded me of The Chronicles of Narnia, both I really enjoyed.

There are cool talking creatures, interesting characters, and a whole new world to explore in this book. Turns out its the first of a trilogy and I'm excited to read the other two.

I kind of thought that this book could have been about teenagers and it still would have worked without any issues. There was also a lot more war and battles than I typically see in these kinds of books for children, but I didn't mind it. Only other odd thing was the family dynamic. It seemed a little weird to me, but I guess it had to be because then the story wouldn't have worked itself out in the same way and I can get behind that. I won't say more because I don't want to give any spoilers.

It was good. The pictures were really cool, the story was an easy read, and I liked it. I have already bought the next two and I'm going to read and review those too.

I read some reviews on Goodreads that complained about the beginning and its references to a hipster Portland and such, but the rest of the story is so much more then that. Don't let that kind of silliness distract you from a great story since that stuff is not what the book is really about.

Recommendation: If you enjoyed Narnia and the Labyrinth, give this a try. It's pretty darn good.
Posted by Pamela Burke at 10:00 AM