The Sandman by Lars Kepler 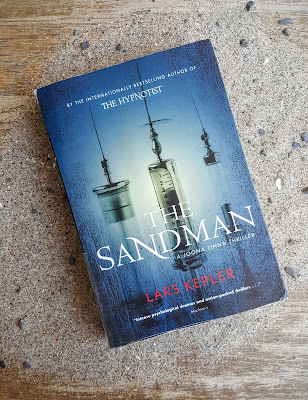 So this book is the fourth book in a series by a Swedish couple who use the pen name Lars Kepler. They are named Alexander Ahndoril and Alexandra Coelho Ahndoril and are both published authors on their own.

When I heard about this series that follows Detective Inspector Joona Linna, it was said that Lars Kepler was the next Stieg Larsson (the author of The Girl with the Dragon Tattoo books) and I was excited because I loved those books.

The Sandman was a creepy, mildly shocking thriller. It wasn't really too heavy on the mystery side, it was more about catching the person they already knew did it. There was a lot of bits that were on the scary, in-your-face, psychological side and I don`t know how I feel about that. As far as it being like The Girl with the Dragon Tattoo books... I don`t really think so.

The chapters were super short and it was a fairly easy read. I`m not really sure how I feel about the characters either. They were odd to me, and I found it hard to identify with them. I liked it, but I didn't like it that much. I`m glad it was a library book though, and that I didn't take the plunge and buy it.  I don`t really think I`ll be reading any more of these books either. Just not my style.

Recommendation: If you like creepy psychological thrillers, then you will like this.
Posted by Pamela Burke at 10:00 AM